"After age 65, Americans have more than a 70% chance of needing some form of long-term care."
-American Society on Aging "An estimated 12.1 million Americans need assistance from others to carry out everyday activities."
- As noted on Caregiver.org

An Article by Mr. LTC

The good looking fellow in the photograph is Kevin J. Johnson, President, New York Long-Term Care Brokers, Ltd. with his sons, Brian and Mark on a recent cruise. Kevin is also my former partner and best friend. 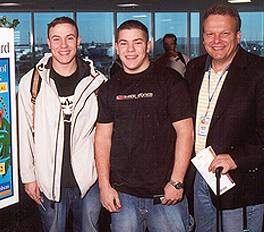 Before we start talking about the features and benefits of long-term care insurance policies, let me tell you a story about the man behind those policies.

Almost anyone can sell an LTCi policy (and many have tried!), but character and integrity ultimately distinguish the "pros." And then there are the truly rare men like Kevin who set the bar even higher...

About six years ago, my Parkinson's was still under control and I was CEO of the agency I had co-founded with Kevin - for ten years, one of the fastest-growing LTCi general agencies in the country.

Kevin had won a trip to Hawaii with one of the major insurance carriers. Now, you have to understand that for many men, these trips are an opportunity to...how shall we say - party hearty. In fact, it is rare during many of these conventions to bring along members of your family.

He couldn't imagine going without his wife and sons. And his need to bring his family was not from some Draconian moral imperative, but one of pure joy. "I just couldn't imagine looking at one of those beautiful islands," he said, "without my boys being there to enjoy it with me."

Additionally, no one - and I mean no one, not even my family - has offered their unconditional support and encouragement through the hardest days of my Parkinson's the way Kevin has. I honestly don't know what I would have done without him.

The world is full of people who can pick up a rate book and give you a quote for long-term care insurance.

And then there are a handful of people like Kevin, who will take the time to walk you through one of the most important financial decisions you may ever make -- and devote the same care and consideration when you need to file a claim.